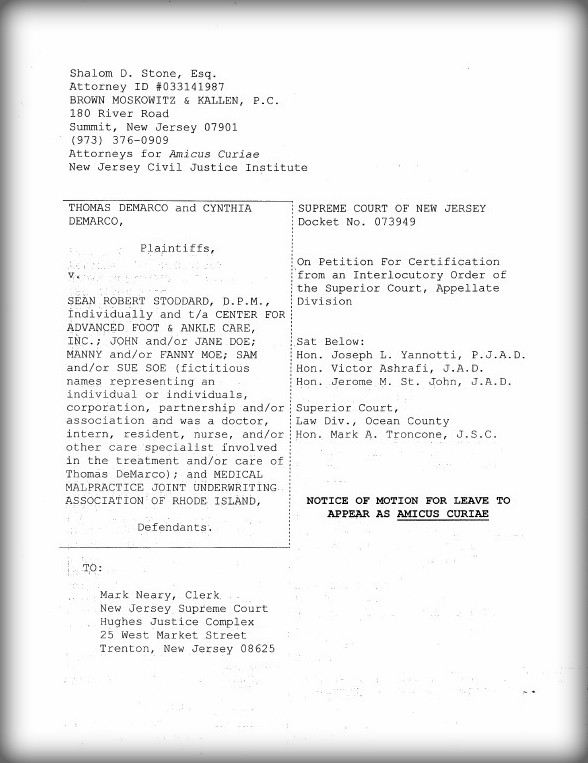 On Monday, April 27, the New Jersey Supreme Court is holding oral arguments in an interesting medical malpractice case. The court’s ruling in this case will signal how serious the state is about stamping out fraud and corruption, and has the potential to dramatically impact malpractice insurance premiums.

The case, DeMarco v. Stoddard, involves a plaintiff who was injured by a doctor who lied in order to get malpractice insurance coverage.

Thomas DeMarco, the plaintiff, was a patient of the defendant, Dr. Sean Stoddard, a podiatrist. In September 2010, Stoddard performed surgery on DeMarco. The surgery was unsuccessful and the plaintiff’s condition worsened, so he sued Stoddard for medical malpractice.

DeMarco asked the court to require JUA to compensate him for his injuries despite the fact that the insurance policy it had issued was void due to Stoddard’s misrepresentations. The trial court granted DeMarco’s request and the appellate court affirmed, holding that medical malpractice insurers should be held to the same standard as auto-insurers in that public policy favors the compensation of innocent third parties. The case is now before the New Jersey Supreme Court.

The New Jersey Civil Justice Institute filed an amicus curiae “friend of the court” brief in this case. We argue that malpractice insurance is significantly different from automobile insurance, and thus New Jersey’s unique rules requiring automobile insurers to compensate innocent third parties even when the insurance policy held by the tortfeasor is void should not be extended to cases involving medical malpractice insurance. The statutory foundation the automobile rule is built on is simply inapplicable to any other type of insurance.

Thank you to Shalom D. Stone of Brown Moskowitz & Kallen for authoring our brief.