For over a century, Americans have relied on the federal Food and Drug Administration (FDA) to regulate the quality and safety of everything from pharmaceutical products and medical devices to the labels on prepared foods. However, there is a growing trend in the courts that would allow lawsuits over these FDA approved items and their labels, effectively subjecting them to ad hoc regulation at the state level via litigation. On February 10, 2015, the New Jersey Civil Justice Institute hosted a panel discussion on this constantly evolving and critically important area of law with former Solicitor General Paul Clement of Bancroft PLLC; Gerald Masoudi of Covington & Burling LLP, who is the former Chief Counsel of the FDA; and Andrew Boczkowski, an Assistant General Counsel at GlaxoSmithKline. 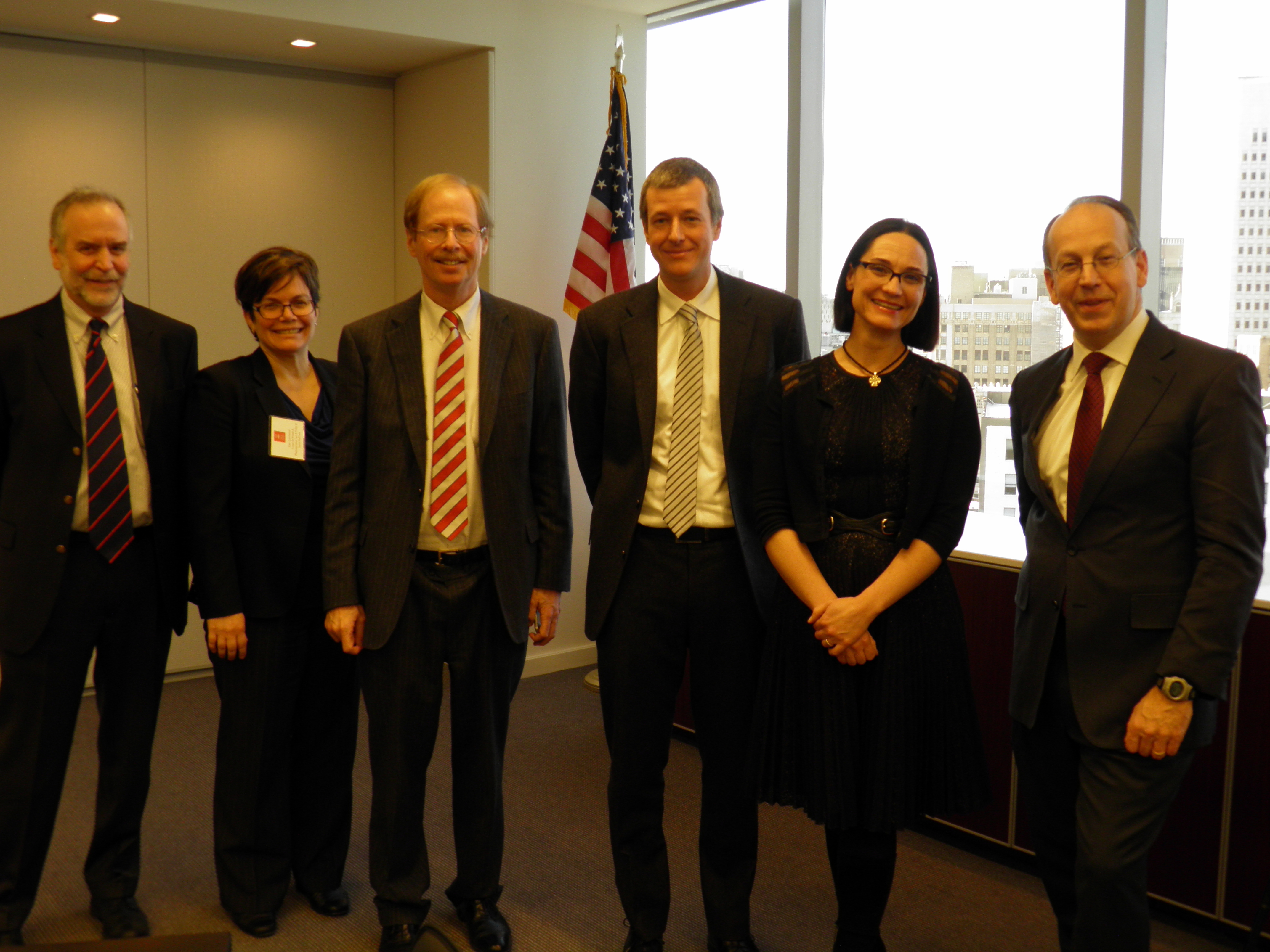 From left to right: John Jacob and Kate Greenwood of the Center for Health & Pharmaceutical Law & Policy at Seton Hall Law, which sponsored the event at the supporter level; the event moderator, David Kott, a partner at McCarter & English, which hosted the event and served as the premier sponsor; Andrew Boczkowski of GlaxoSmithKline; Alida Kass, the chief counsel of the New Jersey Civil Justice Institute; and Paul Clement of Bancroft PLLC.

Paul Clement kicked things off with an overview of what preemption is and offered his thoughts on why courts are uncomfortable with the idea that common law tort claims should not be allowed in certain circumstances. He then provided a quick summary of the case law that has developed around this issue. He emphasized that in cases like Wyeth v. Levine, which he argued before the United States Supreme Court, the specific underlying facts of each case seem to drive the decision more than an overarching theory of what claims should or should not be preempted does.

Gerald Masoudi focused his remarks on how the FDA regulates labeling and the adequacy of warnings, which are frequently the basis for common law claims filed against drug makers. He highlighted the tensions between wanting to be in control of labeling but not wanting to be responsible for the consequences of labeling decisions, and in wanting to adequately warn but not over-warn.

As someone who is in-house at a name-brand pharmaceutical giant, Andrew Boczkowski was able to give attendees a sense of the thought process a company goes through when faced with a common law-based lawsuit. He also explained some of the differences between being a name-brand defendant and being a generic defendant.

It was clear from the discussion that this has been an area of law dominated by the courts and the FDA rather than the legislative branch. This, however, does not mean that there is no room for legislative action on this issue.

“We should leave the regulation to the regulators, and provide that where the FDA has approved a given product or label, that approval preempts state litigation,” said Marcus Rayner, the President of the New Jersey Civil Justice Institute. “Here in the ‘nation’s medicine chest’ we should be doing all we can to grow and expand the pharmaceutical and medical device industries. A policy protecting these industries from litigation after the FDA has issued its approval of their products would be a very reasonable, budget-neural way to incentivize industry expansion.”

Edited video recording of the event.