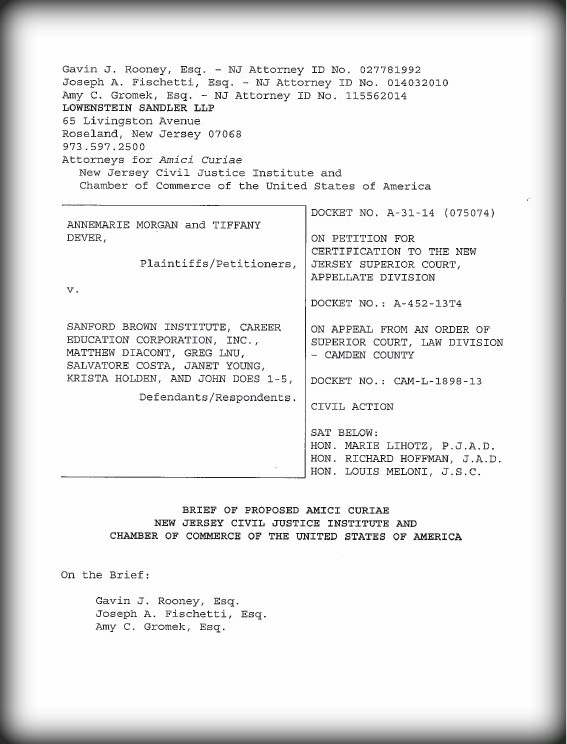 Can parties to a contract be compelled to arbitrate New Jersey Consumer Fraud Act claims, or do the special remedies provided by the CFA necessitate resolution in court? How the New Jersey Supreme Court answers this question will have a far-reaching impact on our state’s business climate and economic development potential.

In January, the New Jersey Supreme Court agreed to hear the case Morgan v. Sanford Brown Inst. The case centers around claims by students against Sanford Brown, a for-profit institute of higher education.

When the plaintiffs enrolled at Sanford Brown they signed an “Enrollment Agreement” which stipulated that all disputes would be resolved via arbitration. The plaintiffs argue that their Consumer Fraud Act claims should not be governed by the arbitration agreement because the agreement limited some of the remedies available to them.

The trial court agreed with the plaintiffs, but the Appellate Division reversed, holding that the severability provision also contained in the Enrollment Agreement cut off the provisions limiting remedies but preserved the arbitration provisions as a whole. The New Jersey Supreme has agreed to hear the plaintiffs appeal.

The New Jersey Civil Justice Institute and the United States Chamber of Commerce have filed a joint amicus curiae brief to the New Jersey Supreme Court urging the court to uphold the arbitration agreement at issue, and affirm that arbitration is an effective, and even favored, means of dispute resolution.

Arbitration is speedy, fair, inexpensive, and less adversarial than litigation. Congress and the United States Supreme Court have mandated that courts respect contractual agreements to arbitrate. In direct contravention of this, New Jersey courts, including the state supreme court, have been issuing rulings that disfavor arbitration agreements, implying it is inferior to traditional court proceedings. We argue that New Jersey has no choice but to conform its law to the controlling federal authority favoring arbitration.

As the United States Supreme Court has repeatedly stressed, getting the law right on arbitration is critical. New Jersey does not have the option of making its own law in this area.

NJCJI and the Chamber would like to thank Gavin J. Rooney, Joseph A. Fischetti, and Amy C. Gromek of Lowenstein Sandler LLP for their work on this brief.