A selection of the need-to-know civil justice news for June 3-16. END_OF_DOCUMENT_TOKEN_TO_BE_REPLACED

Both houses of the New Jersey Legislature held their first voting session of 2017 on Monday, January 23, and each house took up a bill the New Jersey Civil Justice Institute is opposing. END_OF_DOCUMENT_TOKEN_TO_BE_REPLACED

A recent article by Law360 surveyed New Jersey’s legal community about what issues it thinks we should all keep an eye on as members of the legislature come back to Trenton to finish up the second half of their two-year session and vie for re-election. Employment laws that increase employer liability, such as paid sick leave and equal pay, were identified by many as key issues, and NJCJI’s chief counsel, Alida Kass, pointed out that several anti-arbitration measures have also been introduced.

Assembly Bill A-3064 — reads as follows: “A state agency shall not enter into a contract or agreement with a business entity that requires any person or public entity, as a condition of doing business with that business entity, to give up any right or remedy provided by the laws of this state.”

The Assembly passed the bill in October and it remains pending in the Senate.

… the New Jersey Civil Justice Institute, which opposes the legislation, has argued that deterring businesses from including such binding provisions in their contracts would mean transferring wealth from lower- and middle-class consumers to wealthy attorneys who make money litigating class actions.

“If this legislation becomes law, but is not successful at deterring businesses from including arbitration clauses in their contracts, the state of New Jersey will face significant difficulty procuring necessary products from businesses that choose lower prices and predictable contracts over state business,” according to a post on the institute’s website.

Alida Kass, chief counsel of the institute, told Law360 that arbitration is a faster and more efficient means of dispute resolution. For businesses, the value of arbitration is “the ability to ensure that you can resolve disputes on a case-by-case basis and … foreclose a class action,” Kass said.

Kass questioned why the state would “put a thumb on the scale against arbitration,” adding that the process works “especially in these sort of low-dollar consumer claims, so much more efficiently and you’re so much more likely to get a favorable outcome on an individualized basis in a timely manner as opposed to a class action that’s going to drag on for three, five years.”

Read the full article from Law360.

Earlier this month, the New Jersey Supreme Court released two opinions that should alarm New Jersey’s business community. In both cases, the high court refused to honor private contracts because they felt the terms were unfair. The opinion in each of these cases is disappointing, but when viewed together, they suggest our court system has developed a dangerous disrespect for private contracts.

Click here to read the rest of this article by NJCJI’s President, Marcus Rayner, on the NJBIZ website.

The New Jersey Civil Justice Institute strongly opposes the so-called “wage theft” bill the Assembly Judiciary Committee is holding a hearing on today. A862 does much more than protect employees against wage theft, which is, of course, already illegal. As amended, this bill would mess with the definition of “independent contractor” and provide a backdoor for getting all the worst aspects of the pending “paid sick leave” legislation enacted.

END_OF_DOCUMENT_TOKEN_TO_BE_REPLACED

A selection of the need-to-know civil justice news for the week of June 11-17. END_OF_DOCUMENT_TOKEN_TO_BE_REPLACED 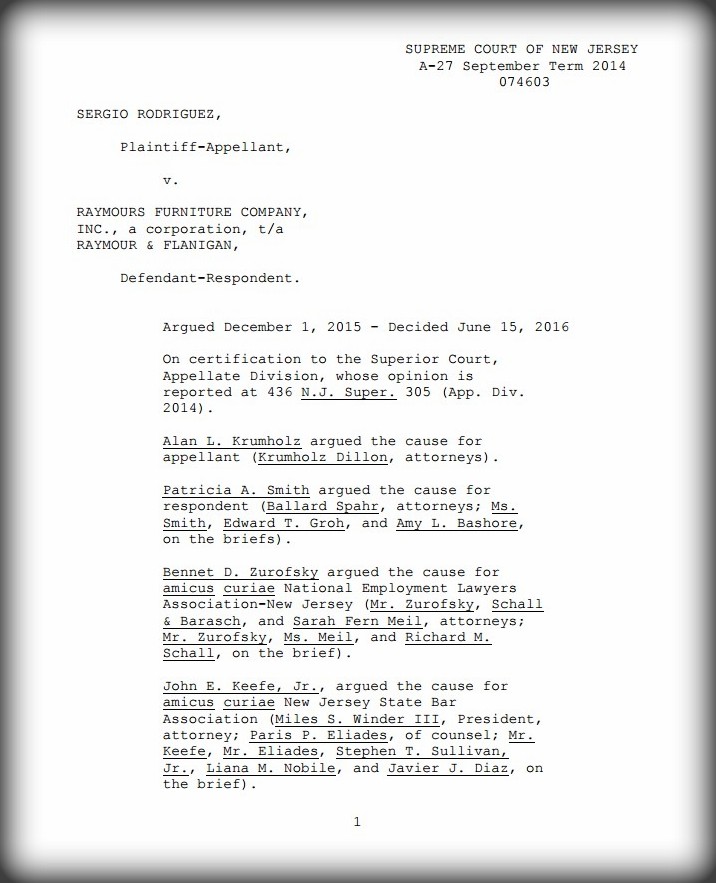 The New Jersey Supreme Court issued another disappointing decision this week, over-turning an employment contract in the name of creating better public policy. At issue was an employment contract that set its own time limit for bringing lawsuits against the employer instead of relying on the default rules in the statutes as a limit. The high court decided to ignore the contract and allow the employee to bring a lawsuit well after the time limit he had agreed to when he was hired. END_OF_DOCUMENT_TOKEN_TO_BE_REPLACED

A selection of the need-to-know civil justice news for the week of May 28-June 3. END_OF_DOCUMENT_TOKEN_TO_BE_REPLACED