On February 28, Gov. Christie delivered his eighth and final budget address to a joint session of the legislature, officially kicking off negotiations on the state’s FY 2018 budget. The legislature’s focus for the next few months will essentially be on the budget, as it must be passed by July 1.

Click here to read the full Budget Summary from the Office of Management and Budget.

Several items on NJCJI’s policy agenda are budget neutral changes that would help to improve New Jersey’s economy and could reduce future spending by the courts.

“The correlation between legal reform and economic growth is clear,” said Marcus Rayner, President of the New Jersey Civil Justice Institute. “Civil justice reform is a way to capture the money we waste on lawyer’s fees and litigation costs – without raising taxes or cutting essential services.”

A selection of the need-to-know civil justice news for the week of January 7-13.

From Addiction To Pensions: 10 Things To Know About Christie’s 2017 State Of The State

Gov. Chris Christie on Tuesday delivered his seventh annual State of the State address — and even he noted it was markedly different than his previous ones.

What They Said About Christie’s State Of The State Speech

With Gov. Chris Christie devoting most of his final State of the State address laying out a blueprint to tackle heroin and opioid addiction, New Jersey lawmakers, lobbyists, and mental health experts offered mostly praise for his “passionate” remarks. Some took issue, however, with the governor’s singular focus on addiction. They said they hoped he would make room in his last year in office for other issues like school funding, preserving the Medicaid program expansion under Obamacare and the underfunded state pension system.

A little more than week after new bail reforms took effect in New Jersey, Governor Christie signed into law a bill that adds 20 new judges to the state Superior Court system and boosts spending by $9.3 million to pay for that expansion.

A lawsuit filed Tuesday in a California federal court claims Nestlé packages some of its Raisinets in opaque movie-theater-style containers that lead customers to believe they are buying a full box, when in fact only 60% of the box contains chocolate-coated raisins.

Aiming to transition seamlessly from her current position, college senior Molly Black is holding out hope that her current internship with BrownLink Media will lead to a class-action lawsuit, sources confirmed Monday. “I spend 12-hour days here, six days a week, so I think I have a decent shot of leveraging this experience directly into a legal battle against the company,” said Black, 21, adding that working through her legally mandated lunch hour would likely further increase her chances of staying on long-term as a plaintiff in a multiyear trial.

A Florida man sentenced to 10 years in prison for using a stolen identity to obtain more than $300 in products and services from Verizon Wireless is suing the company for not stopping him.

Debt Collectors Take On Lawyers In What May Be N.J.’s Least Empathetic Lawsuit

It’s shaping up to be a battle royale between members of some of the least popular professions in New Jersey. A Bergen County collections agency has filed a class action lawsuit against five lawyers who it claims are running a racketeering scheme targeting collections agencies. The lawsuit, filed in December in the U.S. District Court in Trenton, claims that the attorneys file bogus class action suits against the collections companies, knowing that the companies will be forced to settle the claims quickly for less than it would cost them to go through the judiciary process.

A selection of the need-to-know civil justice news for the week of May 14-20. END_OF_DOCUMENT_TOKEN_TO_BE_REPLACED

Gov. Chris Christie took up his veto pen on Monday and conditionally vetoed an equal pay bill that would have made New Jersey a significant outlier and opened employers in our state up to unprecedented liability. In his five-page veto message, Christie objected to several provisions of the bill that NJCJI had flagged as problematic.

“Governor Christie protected New Jersey employers from endless litigation while making it clear that gender-based pay discrimination should not be tolerated in  New Jersey,” said NJCJI president Marcus Rayner. “The real purpose of this bill was to make it more lucrative to sue New Jersey employers.”

“We can protect employees from discrimination without subjecting employers to this type of unlimited liability. As an attorney Gov. Christie knows this, so he was able to see through the misinformation being spread about this legislation, and provide and alternative that would actually codify our existing case law and match federal law.”

END_OF_DOCUMENT_TOKEN_TO_BE_REPLACED

A selection of the need-to-know civil justice news for the week of April 9-15. END_OF_DOCUMENT_TOKEN_TO_BE_REPLACED

END_OF_DOCUMENT_TOKEN_TO_BE_REPLACED

On February 16, Gov. Christie delivered his budget address to a joint session of the legislature, officially kicking off negotiations on the state’s FY 2017 budget. The legislature’s focus for the next few months will essentially be on the budget, as it must be passed by July 1.

END_OF_DOCUMENT_TOKEN_TO_BE_REPLACED

Gov. Chris Christie delivered the 2016 State of the State Address on January 12 before a joint session of the state legislature. During the speech the governor laid out his priories for the coming year. 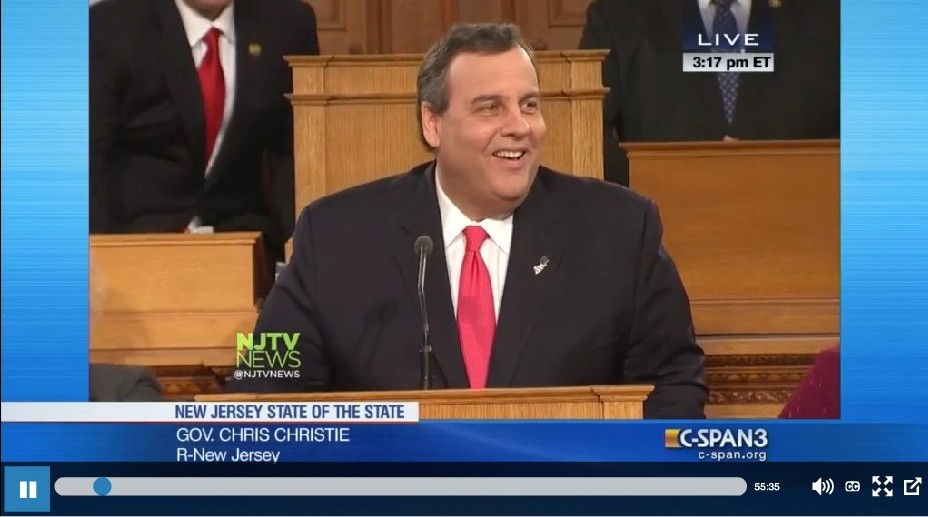 END_OF_DOCUMENT_TOKEN_TO_BE_REPLACED

On December 11, Gov. Christie used his veto pen to strike down S374/A3403, which would have awarded more money to workers’ compensation attorneys at the expense of their injured clients. Gov. Christie should be applauded for stopping this bad bill from becoming a law. END_OF_DOCUMENT_TOKEN_TO_BE_REPLACED

One of our complaints about New Jersey’s Consumer Fraud Act is that it is overly broad – encompassing many disputes that could resolved more efficiently by other means. We frequently oppose bills that would add to the already cumbersome Act, so it surprised many when came out in support of a recent bill expanding the CFA. END_OF_DOCUMENT_TOKEN_TO_BE_REPLACED