This January, Democrat Phil Murphy will be sworn in as the 56th New Jersey Governor, and the State Legislature will convene its 218th session, with many new faces under the State House dome. Although the people in power are changing, our mission remains the same. We are committed to improving New Jersey’s civil justice system to ensure that all parties are treated fairly. The desire for a fair and efficient legal system crosses party lines and unites otherwise divided factions. END_OF_DOCUMENT_TOKEN_TO_BE_REPLACED

A selection of the need-to-know civil justice news for October 28-November 3. END_OF_DOCUMENT_TOKEN_TO_BE_REPLACED

A selection of the need-to-know civil justice news for the week of May 19-26. END_OF_DOCUMENT_TOKEN_TO_BE_REPLACED 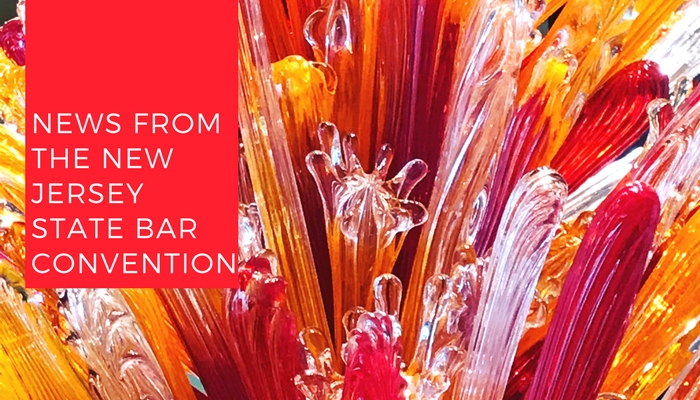 Last week, the New Jersey State Bar Association held its annual convention in Atlantic City. Over 2,500 judges, lawyers, law clerks, and law students headed down the shore in search of CLEs and the scoop on emerging legal issues. In the following post, NJCJI’s Emily Kelchen reveals her insights on issues of interest to the civil justice community that were discussed at the convention. END_OF_DOCUMENT_TOKEN_TO_BE_REPLACED

On February 28, Gov. Christie delivered his eighth and final budget address to a joint session of the legislature, officially kicking off negotiations on the state’s FY 2018 budget. The legislature’s focus for the next few months will essentially be on the budget, as it must be passed by July 1.

Click here to read the full Budget Summary from the Office of Management and Budget.

Several items on NJCJI’s policy agenda are budget neutral changes that would help to improve New Jersey’s economy and could reduce future spending by the courts.

“The correlation between legal reform and economic growth is clear,” said Marcus Rayner, President of the New Jersey Civil Justice Institute. “Civil justice reform is a way to capture the money we waste on lawyer’s fees and litigation costs – without raising taxes or cutting essential services.”

A selection of the need-to-know civil justice news for the week of January 28-February 3.

State Sen. Diane Allen is retiring from the state Senate at the end of her current term, the latest in a line of veteran lawmakers opting not to seek re-election.

A New Milford man has filed suit against the owners of an apartment building, claiming he suffered serious injuries after tripping over a Christmas tree left for trash collectors.

The New Jersey Supreme Court’s decision this week to reinstate a $25 million verdict for a former Accutane user by applying the state’s statute of limitations could drive up the number of product liability suits in the Garden State from out-of-state plaintiffs hoping to avoid timeliness challenges, some attorneys say.

The widow and daughter of a Brooklyn man who killed himself by jumping off the George Washington Bridge have filed a $10 million lawsuit against the Port Authority, saying the agency should have installed suicide-prevention barriers to stop him and the other troubled souls who have flocked almost daily to the span to kill themselves.

We thought we understood statutes of limitations and choice-of-law rules in New Jersey.  Until yesterday.  That was when we read the New Jersey Supreme Court’s opinion in McCarrell v. Hoffmann-La Roche, Inc., No. 076524, 2017 WL 344449 (N.J. Jan. 24, 2017), which unhinged that state’s statute of limitations and choice-of-law jurisprudence from its own precedent and placed statutes of limitations in a special class without much explanation.  And the court did all of this for the stated purpose of preserving plaintiffs’ claims and not “discriminating” against an out-of-state plaintiff’s ability to sue a New Jersey company in New Jersey, after the suit would be barred in the plaintiff’s home state.

N.J. Senator: Pay Equity Debate Is About Remedies, Not Merits

Everyone agrees that women deserve equal pay for equal work.  Thankfully, both state and federal law already prohibit wage discrimination on the basis of an employee’s gender, as they rightly should.

During his decade on the bench, U.S. Circuit Court Judge Neil Gorsuch has penned several opinions that favor businesses over consumers in disputes about arbitration clauses, labor and employment issues, and class-action venues.

New Jersey Named the No. 5 Judicial Hellhole in the U.S.

For the past two years, the American Tort Reform Foundation (ATRF) has listed New Jersey—or Atlantic County specifically—on the watchlist of their annual report examining the top nine courts or areas that have developed problematic legal reputations. But in the 2016-2017 ATRF report, New Jersey was bumped up to a full-blown judicial hellhole, no. 5 on the list.

The Met Wins Admission Charge Lawsuit, But Lawyer May Rack Up $350K

The big winner from a lawsuit against the Metropolitan Museum of Art over its recommended $25 admission charge is the plaintiffs’ lawyer — who is seeking a staggering $350,000 fee for handling a case that resulted in a nonmonetary settlement.

The Flood of Class Actions Under NJ’s TCCWNA

Enacted over three decades ago, New Jersey’s Truth-in-Consumer Contract, Warranty and Notice Act, N.J.S.A. 56:12-14 to -18 (TCCWNA), sat largely unnoticed by the plaintiffs bar until recently. But in the past couple of years, scores of putative class actions have been filed alleging violations of TCCWNA against a broad array of businesses such as Wal-Mart, Target, J. Crew, Select Comfort, Burlington Coat Factory, Toys “R” Us, Bed Bath & Beyond, TGI Friday’s, Johnston & Murphy, Whirlpool, and Bob’s Discount Furniture.

A Minnesota federal judge must hold hearings to determine whether a proposed settlement for about 100 million Target customers who were victims of a 2013 security breach treats all customers fairly, a federal appeals court says.

Both houses of the New Jersey Legislature held their first voting session of 2017 on Monday, January 23, and each house took up a bill the New Jersey Civil Justice Institute is opposing. END_OF_DOCUMENT_TOKEN_TO_BE_REPLACED

A selection of the need-to-know civil justice news for the week of January 7-13.

From Addiction To Pensions: 10 Things To Know About Christie’s 2017 State Of The State

Gov. Chris Christie on Tuesday delivered his seventh annual State of the State address — and even he noted it was markedly different than his previous ones.

What They Said About Christie’s State Of The State Speech

With Gov. Chris Christie devoting most of his final State of the State address laying out a blueprint to tackle heroin and opioid addiction, New Jersey lawmakers, lobbyists, and mental health experts offered mostly praise for his “passionate” remarks. Some took issue, however, with the governor’s singular focus on addiction. They said they hoped he would make room in his last year in office for other issues like school funding, preserving the Medicaid program expansion under Obamacare and the underfunded state pension system.

A little more than week after new bail reforms took effect in New Jersey, Governor Christie signed into law a bill that adds 20 new judges to the state Superior Court system and boosts spending by $9.3 million to pay for that expansion.

A lawsuit filed Tuesday in a California federal court claims Nestlé packages some of its Raisinets in opaque movie-theater-style containers that lead customers to believe they are buying a full box, when in fact only 60% of the box contains chocolate-coated raisins.

Aiming to transition seamlessly from her current position, college senior Molly Black is holding out hope that her current internship with BrownLink Media will lead to a class-action lawsuit, sources confirmed Monday. “I spend 12-hour days here, six days a week, so I think I have a decent shot of leveraging this experience directly into a legal battle against the company,” said Black, 21, adding that working through her legally mandated lunch hour would likely further increase her chances of staying on long-term as a plaintiff in a multiyear trial.

A Florida man sentenced to 10 years in prison for using a stolen identity to obtain more than $300 in products and services from Verizon Wireless is suing the company for not stopping him.

Debt Collectors Take On Lawyers In What May Be N.J.’s Least Empathetic Lawsuit

It’s shaping up to be a battle royale between members of some of the least popular professions in New Jersey. A Bergen County collections agency has filed a class action lawsuit against five lawyers who it claims are running a racketeering scheme targeting collections agencies. The lawsuit, filed in December in the U.S. District Court in Trenton, claims that the attorneys file bogus class action suits against the collections companies, knowing that the companies will be forced to settle the claims quickly for less than it would cost them to go through the judiciary process.