A selection of the need-to-know civil justice news for the week of April 30-May 6. END_OF_DOCUMENT_TOKEN_TO_BE_REPLACED

A selection of the need-to-know civil justice news for the week of February 13-19.

END_OF_DOCUMENT_TOKEN_TO_BE_REPLACED 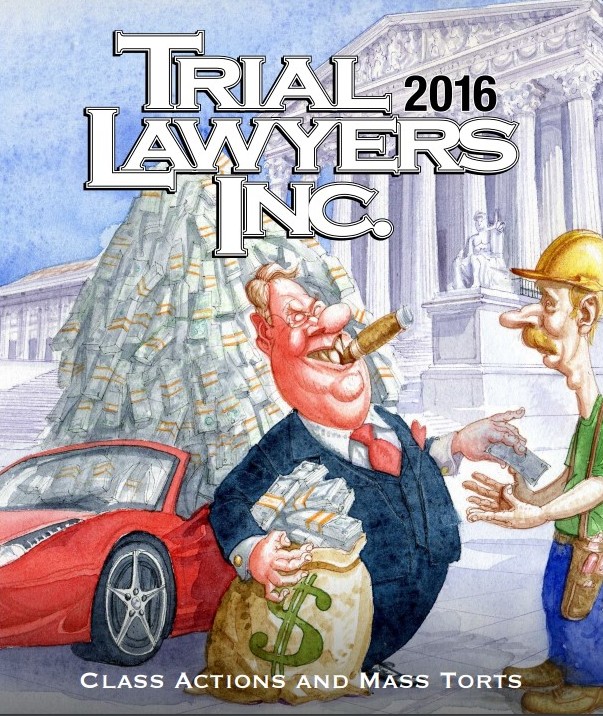 The Manhattan Institute has released the 20th installment of its groundbreaking, investigative series Trial Lawyers Inc. The most recent report, like the many that have come before it, reaffirms the fact that not all attorneys are practicing because they believe in fighting for justice. Some attorneys are simply in the business because it is good business.

Although the lawsuit industry is massive, information on it can be scarce: Law firms, unlike publicly traded corporations, do not disclose business and financial results in 10-Ks or proxy statements. The Manhattan Institute’s reports—stylized as annual reports of the plaintiffs’ bar, which it calls Trial Lawyers, Inc.—are intended to help fill that gap by shedding light on the size, scope, and inner workings of the lawsuit industry.

A selection of the need-to-know civil justice news for the week of February 6-12. END_OF_DOCUMENT_TOKEN_TO_BE_REPLACED

On December 11, Gov. Christie used his veto pen to strike down S374/A3403, which would have awarded more money to workers’ compensation attorneys at the expense of their injured clients. Gov. Christie should be applauded for stopping this bad bill from becoming a law. END_OF_DOCUMENT_TOKEN_TO_BE_REPLACED

Last year’s eye-opening decision in the case In re Garlock Sealing Technologies, LLC was shocking. We had long suspected that asbestos plaintiffs and their attorneys were gaming the system in order to increase their recoveries, but we had no idea just how big of a problem it was. Garlock showed that mitigating evidence had been withheld in almost all the cases brought against it over the past decade, but was the same thing happening in cases brought against other defendants? END_OF_DOCUMENT_TOKEN_TO_BE_REPLACED

A selection of the need-to-know civil justice news for the week of October 31-November 6. END_OF_DOCUMENT_TOKEN_TO_BE_REPLACED

In a recent article detailing some of the fraud that has been uncovered in the BP oil spill settlement claims, Reuters’ Alison Frankel makes a great point: plaintiffs’ attorneys should not be given a free pass to behave badly and flout the rules just because they are representing the “little guy.” END_OF_DOCUMENT_TOKEN_TO_BE_REPLACED

A selection of the need-to-know civil justice news for the week of October 24-30.

Halloween Special: Must Home Sellers Disclose That A Home Is Haunted?

In a recent Charlotte Agenda article, the author, Mary F. Gross, reports on a home that her friend recently purchased – a 1920’s “bootlegger house” which came with historical character, secret compartments for stashing booze, and . . . a ghost? The buyers were apparently notified for the first time at the closing that the home also came with a “mischievous spirit.” In the piece, the author remarks that she would have “ripped up every single document in front of me and accused the owner of breaking some sort of ghost-disclosure law.” This got us thinking. Since it is the week of Halloween, we thought it appropriate to examine what type of “ghost disclosure law” there might be.

How Much Can You Scare Children on Halloween Before You Get Sued?

For anyone planning to terrorize unsuspecting trick-or-treaters, you may want to ask yourself: Is it worth a potential lawsuit?

If you’ve been out of the loop the past few years, crowdfunding has become a major force in how capital is raised – outside of vcs, angels, banks, and the like. Crowdfunding is the process by which business, causes, and people raise monetary contributions from a large number of people, typically via the internet. It allows anyone with an idea or project to bypass the traditional financial apparatus of funding.

Bacon is the New Asbestos! Really?

So, this is a perfect example of the realities of this world and how state of the art can be distorted. The World Health Organization has indicated that processed foods, such as bacon, sausage and hot dogs are in the same category as smoking and asbestos in terms of their potential to cause cancer. The news reports that have come out in the last few days barely touch upon the science and medical aspects, yet here come the sound “bites” that processed food is deadly.

Does easy financing spur more litigation? It’s a big talking point for the people at the U.S. Chamber’s Institute for Legal Reform, and they may have their best example in pelvic mesh litigation, where hedge funds and specialized litigation finance firms have bankrolled a wave of television advertising and online marketing that has helped stimulate tens of thousands of lawsuits against Boston Scientific, Johnson & Johnson and others.

As Uber Technologies Inc. faces a pair of court challenges that raise big questions about the way it classifies, pays and vets the 300,000 drivers offering rides through its app, the cases may hinge on what many would call a legal technicality.

As is almost always the case with contrived consumer class actions, lawyers who served up the now infamous Subway “footlong” litigation are poised to feed on more than a half-million dollars in fees while their putative clients go hungry.

A new report from the American Tort Reform Association and the U.S. Chamber’s Institute for Legal Reform, “The Trial Lawyer Underground: Covertly Lobbying the Executive Branch,” documents how plaintiffs’ lawyers have been able to successfully lobby the executive branch to expand civil liability (and increase their bottom lines) over the past few years. END_OF_DOCUMENT_TOKEN_TO_BE_REPLACED