$115 million dollars. That’s how much money a jury in Florida thinks the internet media company Gawker should have to pay Hulk Hogan to compensate the former WWE Superstar for the damage he suffered when the company posted a video of the Hulkster having sex with his then-best friend’s wife on their website. The jury also tacked on $15 million in punitive damages just for good measure. Gawker has announced it will appeal, but can it afford to? If this lawsuit was based in New Jersey, the answer might be no.

Setting aside the salacious and outrageous facts of this case, at its heart, it presents a really interesting question about privacy and the First Amendment in the digital age. It is also a great illustration of appeal bond reform in action, and that is why we are closely following it.

When a defendant loses a case at trial, and the plaintiff receives a monetary award, state law typically allows the plaintiff to collect that money as soon as the trial court proceedings conclude. In many cases, however, the defendant will appeal to a higher court seeking reversal of what they consider an incorrect outcome.

What happens to the money while the appeal is pending?

In most states, the defendant must post a bond to halt the plaintiff from being able to collect the award while an appeal is pending. These bonds are a holdover from the days when interest was not awarded to the prevailing party following an appeal, so there was an equity to neither party having the use of the money while an appeal was pending. There was also a greater risk a defendant would hide assets or vanish without a trace, leaving the injured plaintiffs with no remedy.

As Politico does a good job explaining, Gawker has potentially dodged an appeal bond bullet. Florida’s state court judges have the power to allow defendants to appeal without posting a bond. This means Gawker may be able to appeal the verdict against them without posting bond, or having their assets subject to seizure. However, even if they must post a bond, they will not have to post the full amount of the verdict. A relatively recently enacted Florida law caps appeal bonds at $50 million.

According to Reuters, the jury was told Gawker is worth $83 million. So, coming up with $50 million would still be really difficult for them, but in the grand scheme of things, having that cap in place means there is a limit to what they are required to post, rather than having to rely on judicial discretion to stay the verdict while the appeals process plays out.

Things would be different if this lawsuit was happening in New Jersey.

If the #HulkVsGawk case was being tried in New Jersey, Gawker would have to post a bond larger that its net worth to stay the verdict during the appeals process unless the court said no bond was necessary.

Other states, like Florida, and more recently Nevada and Maryland, have realized that tobacco companies aren’t the only businesses that get hit with big verdicts, and have put caps in place for all defendants or eliminated appeal bonds altogether. The map below shows how the law varies across the country. 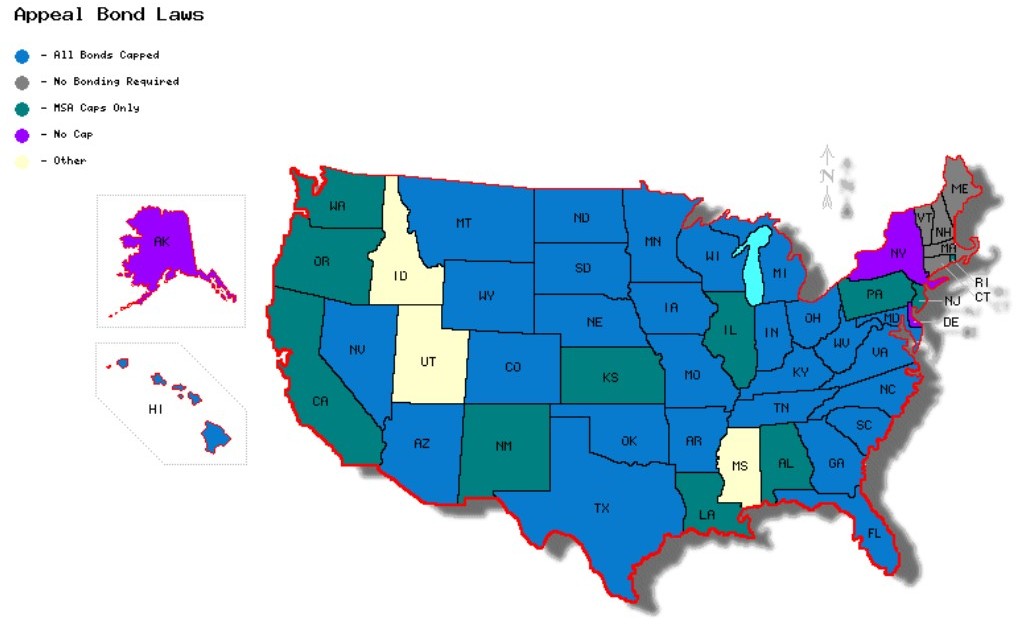 It’s time for New Jersey to recognize that tobacco cases are not the only cases where big verdicts are possible, and adopt an appeal bond cap that applies to all defendants.

There has actually been bi-partisan legislation introduced on this topic this legislative session. A1638, which is being sponsored by Assemblymen Schaer (D-Passaic), McKeon (D-Madison), Wimberly (D-Paterson), and Ciattarelli (R-Somerville) & S1931, which is being sponsored by Senators Rice (D-Newark) and Oroho (R-Sparta) would cap all appeal bonds at $50 million. Similar bills have been introduced in the past, but have always stalled in committee.

Now is the perfect time to contact your legislators, share this article with them, and let them know this is a serious issue that New Jersey needs to debate and decide how to move forward on. It’s time we make sure justice, not economics, is the deciding factor in whether cases can be appealed.