A selection of the need-to-know civil justice news for March 10-16.

Murphy Proposes ‘Fiscally and Morally’ Balanced Budget, with $1.7B in New Tax Revenue

New Jersey Gov. Phil Murphy on Tuesday proposed the largest state budget in history, saying he’ll deliver on his liberal agenda by raising $1.7 billion in new tax revenue, primarily by rolling back a small cut in the state sales tax, generating new revenue off the backs of millionaires and legalizing the sale of recreational marijuana.

How Phil Murphy’s Budget Proves You Elected a Liberal Governor

You can call it the very model of a modern progressive budget. From tax hikes on New Jersey’s wealthiest to tax credits for the working poor and legalization of marijuana, Gov. Phil Murphy’s first state budget proposal leaves virtually no progressive stone unturned.

While some attendees walked away tight-lipped from the governor’s first budget address, others were optimistic that Gov. Phil Murphy has taken a step in the right direction for the state. The tax-heavy budget plan for fiscal year 2019 is a $2.7 billion increase from the previous year and includes some initiatives that could shock the economic system in the state.

Returning to what many in the profession said was an important tradition, Gov. Phil Murphy and the New Jersey State Bar Association have executed an agreement that provides for county bar associations to have a formal role in evaluating potential judicial and prosecutorial nominees.

A federal judge on Monday dismissed a lawsuit accusing Home Depot Inc of deceiving shoppers about the size of its four-by-four lumber. U.S. District Judge Sharon Johnson Coleman in Chicago rejected plaintiff Mikhail Abramov’s claim that the largest U.S. home improvement retailer should be held liable for selling lumber as 4 inches thick by 4 inches wide, when the dimensions were actually 3-1/2 inches by 3-1/2 inches.

A selection of the need-to-know civil justice news for February 3-9.

A plan to give hundreds of judges and top officials in New Jersey pay raises is back. Except this time, it’s not tied to a book deal for Chris Christie. The bill (S1229) cleared its first hurdle Monday when approved by a state Senate panel. The measure would gives judges and county prosecutors a $24,000 pay increase over three years and let members of the governor’s cabinet earn the same paycheck as Gov. Phil Murphy: $175,000 — a $34,000 jump from their current salaries.

“The Alabama Supreme Court says a man can’t go forward with his lawsuit against a company involved in booking a death metal concert where he was injured.” The plaintiff said he was thrown to the ground during the Mobile event and suffered serious spinal injuries. “The decision says ICM Partners received a $250 commission for booking the band but had no other involvement.” 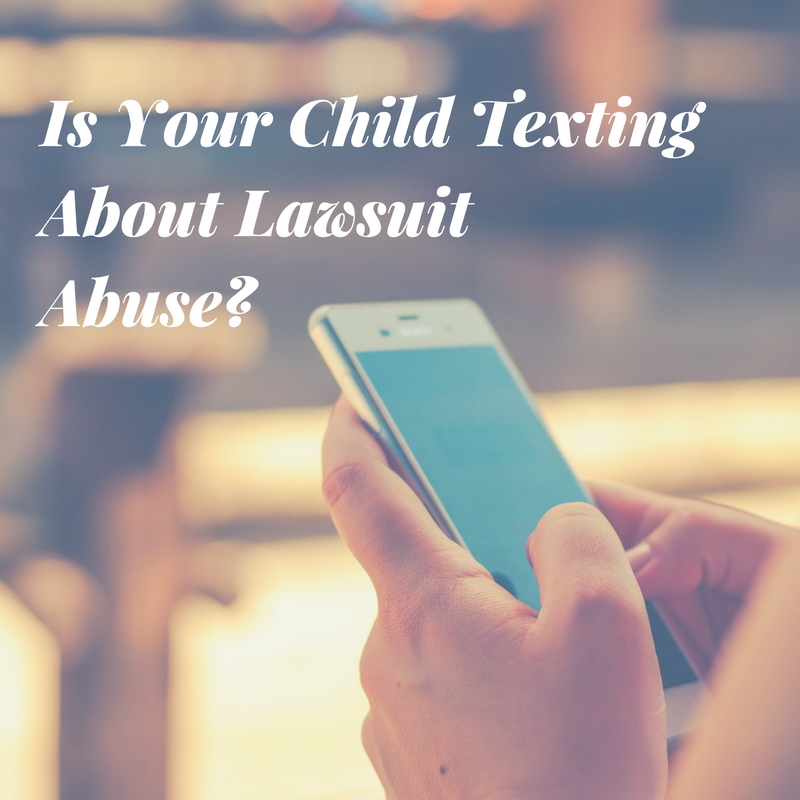 Thanks to their obsession with texting, today’s youth have developed a language all their own. Most of it is innocent, but you should familiarize yourself with common slang that may suggest your child is getting sucked into dark conversations about lawsuit abuse.

Know the language, and talk to your children about the dangers of frivolous litigation.

A selection of the need-to-know civil justice news for January 6-12. END_OF_DOCUMENT_TOKEN_TO_BE_REPLACED

A selection of the need-to-know civil justice news for January 13-19. END_OF_DOCUMENT_TOKEN_TO_BE_REPLACED

A selection of the need-to-know civil justice news for December 30-January 5.

The year 2017 will be remembered for change. From federal changes after the first full year of the Trump administration, to the gubernatorial election of Phil Murphy and the proposed changes he will make when he is officially sworn in as the state’s 56th governor this month.

High-profile New Jersey cases are poised for key developments in 2018, when the U.S. Supreme Court may decide on the state’s bid to legalize sports betting and the Third Circuit ponders appeals by former public officials facing prison for their roles in the infamous George Washington Bridge lane closures.

After back-to-back big political years that saw Donald Trump elected president and Phil Murphy elected governor, what will 2018 do for an encore? Anyone who knows Jersey politics will expect something crazy to happen. Or lots of crazy things to happen because, well … it’s Jersey politics.

Indianapolis is being sued by a former courts official who alleges that she was fired after she installed air freshers to combat a co-worker’s body odor.

“Our state’s judges shouldn’t have to waste time dealing with lawsuits that don’t pass the laugh test. But they do. All the time,” said NJCJI president and chief counsel Alida Kass. “Many laughable lawsuits are filed because New Jersey law incentivizes them. When the law encourages a disregard for personal responsibility, or allows uninjured parties and their attorneys to collect a windfall, people are going to take advantage of it.”

“We cannot and should not shut the courthouse doors on such claims because we don’t want to prevent people with legitimate grievances from seeking justice, but we can discourage nefarious filers by making some common-sense reforms to our legal system and empowering our judges to make quick work of silly suits,” added Kass.

Cast your vote for 2017’s Most Ludicrous Lawsuit on the NJCJI website before the poll closes on December 28! Then sign up to get our newsletter, where we will announce the winner on December 29.

Not every ridiculous lawsuit filed in the Garden State can make it into the upper echelon of absurdity, so this year we are awarding Dishonorable Mentions to a handful of suits that didn’t quite make the cut, but still leave us scratching our heads in disbelief.

The Subway footlong lawsuit, which was filed in 2013, came to its inglorious ending this year. The 7th U.S. Circuit Court of Appeals threw out the “utterly worthless” settlement agreement, which would have given $5,000 to each of the 10 named plaintiffs and $520,000 to the lawyers involved.

“A class action that seeks only worthless benefits for the class and yields only fees for class counsel is no better than a racket and should be dismissed out of hand,” Circuit Judge Diane Sykes wrote for a three-judge panel. “That’s an apt description of this case.”

The lawyers at DeNittis Osefchen Prince P.C. in Evesham, who filed the first footlong lawsuit, are reportedly not happy with the court’s decision. In a Courier-Post article, attorney Stephen DeNittis disputes claims that the settlement was “a windfall for the attorneys at the expense of the class” He said, “Such was clearly not the case. There were 10 law firms involved in the 3 1/2-year-long action who devoted well over 2,000 hours in time in litigating the matter.”

It seems like every year there is a ridiculous case filed by someone who wants to blame their drunken mistakes on anyone but themselves. This year, a young Bergen County man sued Endicott College and its president under Massachusetts’s social host liability law. He blames them for not stopping him from getting drunk and assaulting three of his now-former classmates. He is seeking damages for the loss to his reputation and for pain and suffering.

As the old saying goes, “Sticks and stones may break my bones, but words will never hurt me may result in a lawsuit.” Well, that’s how one South Jersey politician thought it should go. Former Democratic Councilman Dennis Kleiner of Galloway filed suit against the municipality, the mayor, and another councilman after he resigned his position, claiming rumors and false charges forced him out of office. A Superior Court judge called his “hurt feelings” lawsuit “pointless,” and threw out the complaint, and this year the Appellate Division affirmed that decision.

Jan Konopca has collected over $80,000 by filing Telephone Consumer Protection Act lawsuits against companies that call the many phones he keeps on hand. The law is designed to cut down on unwanted calls, but Konopca seems to relish these communications, which have become quite lucrative for him. His latest suit, which is pending before a federal judge New Jersey, recently survived a motion to dismiss despite the fact that the judge determined “it is most probable that [Konopca] manufactured the harm based on his motivation to be awarded monetary awards in the lawsuits.”

A farmer in Warren county has sued the county fair on behalf of her livestock, who get spooked when hot air balloons fly over her farm. She claims complaints she made in previous years when unanswered, so she had to take the matter to court.

A lot of ridiculous lawsuits were filed in New Jersey this year, but only one can be crowned 2017’s Most Ludicrous Lawsuit. Cast your vote now for this year’s “winner.”

A woman in Hackensack filed a lawsuit against Home Depot after being assaulted by a mouse in one of its stores. She was hospitalized, and claims she “now grab[s] her neck because she feels there is something there, and she suffers nightmares that a mouse might be endangering her life.” And she “looks for mice on her plate when eating.’’

Over 2,000 lawsuits alleging the acne medication Accutane causes intestinal issues have been pending in the New Jersey courts for years despite the fact that there is no scientific evidence supporting such claims. This year, the New Jersey Supreme Court used one of these cases to expand the amount of time out-of-state plaintiffs have to file suit. In another, the Appellate Division laid bare the deficiencies of New Jersey’s unique rules governing the admissibility of expert testimony. We may not be “the nation’s medicine chest” for long if these are the kinds of rulings we continue to see.

For the past few years, scores of businesses have been sued under New Jersey’s Truth-in-Consumer Contract, Warranty, and Notice Act (TCCWNA). This year, a case alleging missing drink prices on menus is a TCCWNA violation made it all the way to the New Jersey Supreme Court. The attorneys involved claimed the suit was worth billions, yes billions, with a b. Thankfully, the Court disagreed, and put the brakes on the runaway train of TCCWNA litigation.

A man in New Milford sued the owners of an apartment building after he tripped on a Christmas tree that was “recklessly, carelessly and/or negligently” discarded on its premises. He claims the experience has caused him “great pain and torment, both mental and physical.”

The Appellate Division’s decision to throw out an otherwise valid arbitration agreement over the check-the-box process the company used to roll out its new policy highlights just how low the New Jersey courts are willing to stoop to strike a blow against arbitration. If other contracts were treated like this, we would have a contract-formation crisis on our hands.

Create your own user feedback survey